Kagura (Kagura) is a traditional stage where dances are performed along with traditional Japanese musical instruments in ceremonies and festivals related to deities enshrined in Japan.
Oita Prefecture is one of the most popular prefectures in Kyushu for Kagura. In particular, Yufu City, where Yufuin Onsen is located, is dotted with more than 10 different kagura performance halls, some of which have been passed down for more than 200 years. Each group is unique, and the Shonai Children’s Theatre, which inherits Shonai Kagura, consists mainly of elementary and junior high school students, who also perform regularly.
Taking advantage of the activities of Kaguraza, Yufuin Onsen holds a regular performance of “Kagura” once a month as one of the pleasures after dinner for people who stayed at Yufuin Onsen for sightseeing. If you watch a Kagura performance for the first time, you will be inspired by the dynamic and brave dance that has been protected as a Shinto ritual. Enjoy to your heart’s content the traditional Japanese culture that has been protected by the residents since ancient times as one of the pleasures after dinner and as a memory of your trip.

period
Once a month ※ Please contact us for the date.

Notes
※ There is a discount for guests staying at a ryokan association member.

About cancellation fee
None 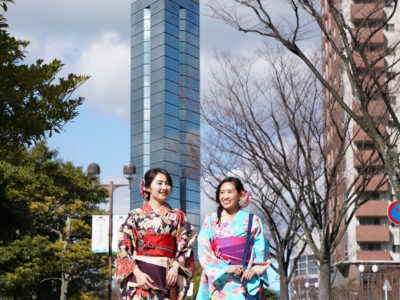 Kimono Dress Up at Fukuoka Tower
Our shop is in Fukuoka Tower, which is a symbol of Fukuoka. – Find your favorite patterns of k